My cute German class teacher introduced a new word into my life yesterday- fremdschämen. It's basically where you feel embarassed for someone else. While I probably feel this too frequently, I have never felt it more than while watching My So-Called Life. Combine this with listening to Teenage Cool Kids and all I wanna do is watch Angela Chase pine after Jordan Catalano.

I'm not sure if this is true, but rumor has it that their album Queer Salutations syncs up to an episode of My So-Called Life. Which would be fantastic. Read the lyrics here and decide for yourself.

Teenage Cool Kids are a pop-punky band from Denton, Texas. They've got a '90s indie rock feel too (I've been listening to a bunch of Superchunk lately). I think their name is kinda stupid (not necessarily a bad thing), but I think they're great. They toured earlier this summer with fellow Texans Trifle Tower, which I of course missed along with everything else as everyone seems to tour in the summer.

Anyway, Queer Salutations came out some time early this year I think or maybe late last year. I love when bands can be totally cheeky & clever all while having some sincerity- maybe that why I listen to so much pop. "Awkward Type of Girl" is my favorite probably. "Write Back Soon" is highly amusing too. Really, I just love the whole album.

"The note that comes with this CD compares them to MENEGUAR and that's exactly what the first song sounds like. The rest of the record is totaaaaaaally influenced by BUILT TO SPILL, and interestingly BUILT TO SPILL was the second band mentioned in the note that came with the CD. Well, thank you, note. You were spot on... Anyway, if you're like me and you thought BUILT TO SPILL's first handful of singles were the best shit ever, you will probably think that this TEENAGE COOL KIDS record is the best shit ever too. Seriously, I knew I'd like this just from looking at the sparse but unpretentious artwork. Fast to mid paced catchy indie rock songs with good lyrics. Listening to this record is like walking through a hipster party with the clever cynical dude who acts like he doesn't want to be there but totally enjoys pointing out why everyone else is full of shit. This was the only record I got this month that I was really psyched about and I want to be at a packed house show in this band's hometown jumping up and down and yelling along with a bunch of other sweaty losers."

And a favorite unrelated picture... 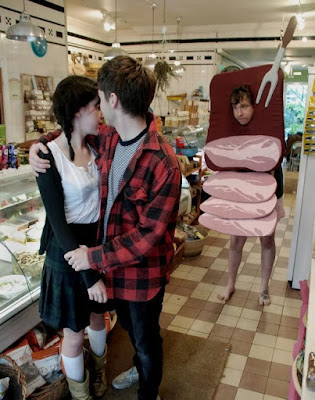 I'm headed to Paris for the weekend to have a slumber party with Amanda & Charlie! I'll be going back to the States the following weekend, which'll be nice- get to see my family and Charlotte (my bff who I haven't seen since May).
For the fall, I'm planning on trying to start upping a bunch of my records. I got a new preamp for my birthday (to replace the previous one I bought for $7 that, needless to say, didn't last that long). This one's supposed to allow me to record stuff onto my computer- hopefully I'm competent enough to figure it out.

Posted by Catherine at 4:14 PM