First things first: lots and lots of news. I have been very bad about keeping this updated lately, clearly. The main reason at this point is that the structure of my life has changed drastically. I'm no longer in school and cannot update this thing at work. Aside from work, I've been keeping pretty busy, and I generally don't want to do more computer-ing once I'm home. Here's one thing I've been doing... 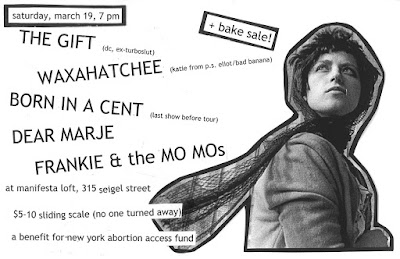 New York Abortion Access Fund provides assistance to low-income women seeking abortion. Hopefully you know about all the fucked up shit our government has been doing to hack away at reproductive rights lately, and hopefully you're doing something about it, whether signing a petition, donating to Planned Parenthood, getting involved with some sort of radical health collective, or something else. The Gift are an awesome band from DC featuring Turboslut front-lady Beck. Waxahatchee is Katie's current solo project (from P.S. Eliot and Bad Banana). Dear Marje are playing their second show, and they're just about the cutest band in Brooklyn. If you live here I hope you make it out!

What's been occupying my time more so, is starting a record label--it's called puzzle pieces as well. I'm frighteningly uncreative. The first release, a 7" by Four Eyes is out now. Next up is a 7" by Bad Banana. That one should be ready within the next month. I'm quite excited by this whole endeavor.

This weekend I went to two rad shows-- Friday night was Fucking Dyke Bitches (ex-Hand Jobs), and last night was the release show for the International Girl Gang Underground zine with Slingshot Dakota (who did an acoustic remix of "Until the Day I Die"), Bad Banana, Aye Nako, and a new band called American Sun. If you haven't had the opportunity to check out Aye Nako they are the no-longer-so-new rendition of Fleabag. They are probably my current favorite Brooklyn band, and you can download their demo here.

And now for a post: For the past however many years, I've had an ebbing and flowing obsession with the Blow. With her electropop songs I think it's easy to get hooked in by the catchy beats, and I certainly have. I think this is only half of Khaela's genius though. She uses pop songs, in some ways more contemporarily pop than other present indie pop bands, to cloak an intelligent critique of popular culture, in a totally queer way. While not overtly queer in physical presentation, she is pretty vocally queer at shows (telling stories about girlfriends and so forth), I think what is so sharp about her performance is in her subtle subversion of pop songs. 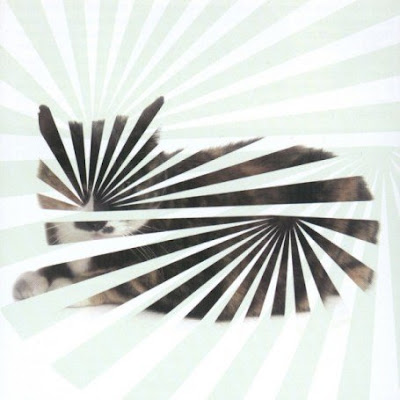 The Blow follows the heterosexual paradigm of pop music with songs such as "Hey Boy." She subtly exaggerates the part of the desperate-for-love, over-analytic female, queering it in the process. I've raved to many I know about how I think Khaela is truly fucking intelligent in the hopes to convert them, I could go on and on and on, but I'll cut myself short, in the hopes of getting to bed at a reasonable hour. Seriously also read her blog.

Poor Aim: Love Songs was originally released on Portland's States Rights Records in 2004 before being reissued (accompanied by remixes) by K in 2007 (after the Paper Television craze). As the K website says: "A concept record loosely unified in failings; songs about failed love, and conversely, love songs that fell short - Poor Aim explores love's yearnings, deceptions, addictions, and ultimately, its complacency." It is in this failure that Khaela's critique finds its strength.