So last Monday morning I woke up around 5:30 or 6 am for no reason. The door to my room is possessed and creaks back and forth, seemingly endlessly. After about a half hour of that, I decided the internet would be a much more productive thing to do. I'm not a fan of all this facebook crap where people invite you to be a fan of their band and what not because I like to be all allusive on the internet (obviously why I write a blog). Anyway, turns out this fateful Monday morning a great great thing happened because Katie invited me to be a fan of her and Allison's new band, Bad Banana. These tracks would be enough to get me super excited and then I glanced to the bottom left corner to see "tour with SOURPATCH east coast, USA." (More on Sourpatch to follow shortly, but hopefully you already know that they rule.)

But seriously, holy shit. For anyone who loves P.S. Eliot, especially their demo, Bad Banana is essential. Perfectly glorious fuzzy pop punk, probably a little bit more on the indie pop side. I've been listening to almost nothing else since Katie sent it to me. Each of them wrote half the songs and then recorded them, and then they were all mashed together into one demo, so you can try to guess which song is by which sister. (I'll put the answers in the comments.)

My new favorite punk show love song is "Stand Next to Me." Cutest fucking lyrics ever: "I don't know the words to this song, I want you to come sing along and put your arm around me/Stand next to me/I see you across the room and I'd like to get to know you/You seem to be in high demand but you're talking to me about your favorite bands-- Descendents & Dinosaur Jr./Maybe I should have spoken up sooner/I'm not looking for a boyfriend, but if I was I would like you to be him." That is what my crush on Bad Banana is like.

This one goes out to my darling friend Jess, who loves this 7" as much as I do. It's another 7" unearthed from the Record Hospital coffins, the first 7" of two by German indie pop band Blass. I know this record came out in 1990 on Bad Moon Records, but not much else beside that. 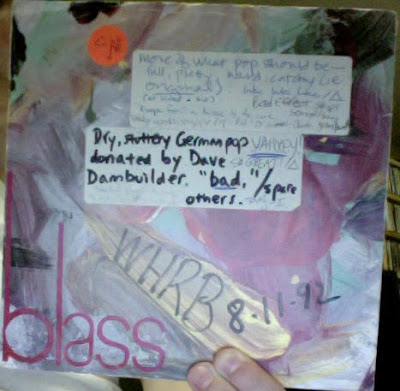 You can see a few more reviews on my lovely photobooth picture of the copy in the RH collection.

This is in many ways more of a single than an EP for me as I only ever really listen to "Bad Effect." I love the touch of art punk/indie rock they introduce from the beginning of the song with the bass line along with lazy jangling guitars and perfect pop lines like "because my heart still burns only for you." "Short Time" certainly has some hooks as well, but who really cares when you have a pop song as superb as "Bad Effect"? I know Jess would back me up here.

Well, it has been a while. Good news is that I'm settled in my new home and have quite a few posts stocked up. Credit to Baris for the introduction to this one, and to Phoenix Hairpins for the link. 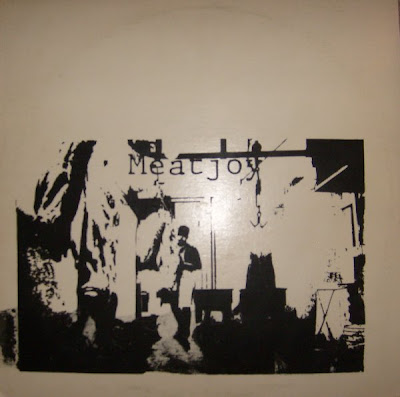 Here's the sole, hard-to-track-down LP from Houston's Meat Joy. Only 1500 were pressed by Flesh & Blood Records in 1984, each with a different cover. Totally queer, totally weird, stripped down post-punk. My favorite is the ambling pop jam "Another Pair," complete with snapping; some matter-of-fact promiscuity going on here. Meat Joy add some feminist social commentary with "Slenderella" and some criticism of hardcore with "Proud to Be Stupid," which always reminds me of a quote from a Huntington Beach punk in Mark Andersen and Mark Jenkins' Dance of Days: "The geeks, the people with new wave ties… When we see someone at a gig that we don’t like, we fuck them up." I'd been curious to know how this band interacted with a lot of the queer punk bands from Texas who were similarly turned off by the whole muscle head hardcore mentality. (For more on that check out the article on queer punks in Austin in MRR's queercore issue from last October.)